Out of production Fn3 laser-cut kits for rolling stock and live steam loco upgrades.
The company offered products from 1999 to 2005. 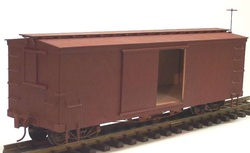 A special-order project, not currently available. We plan to offer this kit again with the correct Thielsen trucks, and in a UP narrow gauge version (DSP&P, Kansas Central, Colo. Central, et al.).

This wood and metal kit is an accurately dimensioned 1:20.3 scale model of the D&RGW's 4000-series 27-foot boxcar.  The cars, 99 in number, were built between 1884-1892 from bad-order 24-foot cars, at first with link-and-pin couplers and Thielsen trucks, later upgraded with knuckle couplers and conventional archbar trucks. This class of car was also used on other Colorado narrow gauge railroads, and is similar to equipment on many other narrow gauge roads around the US. The only survivor is RGS work car 01789, now at the Colorado Railroad Museum.

Our goal is to satisfy two needs: the owner of 1:20.3 locomotives who has nothing to pull, but doesn't have the time or skills to build a finescale craftsman kit, and the finescale modeler who can take the basic kit and a detailing package to produce an accurate model of a prototype car. We do this by offering the kit in selectable modules.

The basic kit offers several advantages over currently available plastic ready-to-run stock. Because it is a 1:20.3 scale model, it is not dwarfed by 1:20.3 locomotives as smaller scale cars are. And because it is a simplified kit, you can have a wood-and-metal car without being a master modeler. Construction time will be shorter and modeling techniques will be easier than with finescale "craftsman" kits, making it an ideal first introduction to wood kit construction. Tools required are in most modeler's toolboxes or are readily availabe: sandpaper, a hobby knife and saw, small clamps and rubber bands, common drill bits, wood glue and CA glue ("superglue").  The model features precision laser-cut wood and plastic parts as well as whitemetal castings. Most holes are pre-drilled with the laser, and cut lines for coupler mounting are scribed on the end sills. The basic kit comes with plastic trucks of 3'-7" wheelbase, simplified details for the superstructure and no underbody details beyond queenposts and trussrods.

The kit is intended to provide accurately scaled rolling stock at an affordable price, comparable in detail and price range with much of the currently availble ready-to-run plastic equipment in "G" scale. Though low in detail level, the basic kit can be upgraded to finer standards with optional detailing packages. A detailing package will be available with underframe details and additional superstructure parts. Cast whitemetal archbar trucks will be available as an additional option. Lettering will be optional (D&RG, D&RGW, RGS). Couplers are not included in the basic kit, and the builder may choose from talgo-mounted couplers on the trucks, or various body-mounted couplers: link-and-pin couplers (Ozark sill-mounted, or draft-gear link-and-pin from Ozark or Hartford) or knuckle couplers (Kadee 835 as shown above, or Hartford cast D&RGW pockets with Kadee or Accucraft knuckles).

Depending on interest and availability, future options for the kit could include a work car conversion (as for RGS 01789), and Thielsen trucks as supplied with the cars when they were first built.

Our goal is to have these cars ready before the end of 2000, at a price in the range of ready-to-run plastic cars. Please check back here or write to the address below for further information.
last update : 2013-12-14