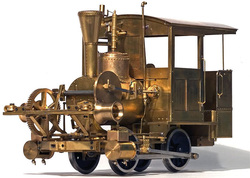 The Elk River Mill & Lumber Co. locomotive #1, better known as the “Falk.” This 9 ton 0-4-0 gypsy locomotive was built in either 1882 or 1884, by Marshutz & Cantrell (also has been known as National Ironworks) of San Francisco. Globe Iron Works was also incorporated in 1882 and built locomotives similar to the Falk, and could have been involved in its construction. The Falk, and its sister engine the “Bear” were designed for use in Northern California’s logging railroads, and marked the changing of an era as steam power replaced the horse, mule and oxen teams which previously had wrestled with the redwoods. Noah Falk, a local timberman of the Humboldt Bay area purchased the the Gypsy No. 1 to use on his short logging railroad he had built in Arcata, CA to service his Dolly Varden Mill. Two years later the Falk was barged down the bay and set on a new track with led to another of Falk’s enterprises – the Elk River Mill and Lumber Co. The Falk operated there for 40 years, first as a log hauler and then as a mill yard switch engine. The Falk also served the small town of Falk, which had sprung up around the successful lumber venture. The Falk is not a true gypsy engine in the traditional sense, but is a close variation which includes a capstan steam winch. The throttle is a ball valve that the engineer turns, much like turning on a water faucet.

The Falk has been restored and lives at the Fort Humboldt State Historic Park and is overseen by the Timber Heritage Association in Eureka, CA. The locomotive is owned by the City of Eureka, and is on loan to the California State Parks Department.

There were indeed 150 produced. One was stolen, I guess, while in customs, as it was missing from its box when delivered to us. We did put the individual numbers on the metalic stickers on the box for about the first 50 or 60, but soon tired of the effort and didn't put a number on the sticker, only attached a sticker to the box .... so there is really no importance to the number. For your information, out of the 150, there were 10 done as finished brass models, not painted. There were 10 done as standard gauge (70.65 mm track gauge), and there are five of those remaining. There were twenty two done with a yellow cab, and the rest that were painted were done in basic black, like you received. So you can see, the numbers meant very little to describe the locomotives.

Designed by John Dolbeer of steam donkey and logging fame, the Bear Harbor and Eel River RR Locomotive No. 1 also known as the Bear Harbor Gypsy or simply the “Bear” was built by the San Francisco firm of Marshutz and Cantrell (National Iron Works) in 1893. The Bear worked in the redwood country of northern California. This locomotive is preserved at the Humboldt County Museum in Eureka, CA. 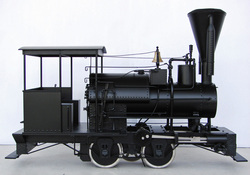 The Betsy was built by the Yosemite Mountain Madera Sugar Pine Railroad in the 1880’s. It was California’s first geared locomotive, not to be confused with the shay locomotive, but due to its large bull gear driving a gear on each axle of the drivers. It lasted in logging service until 1937.