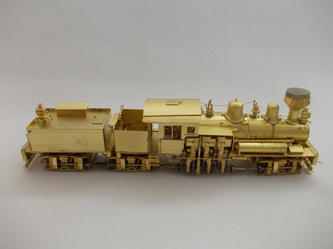 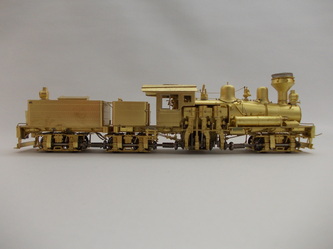 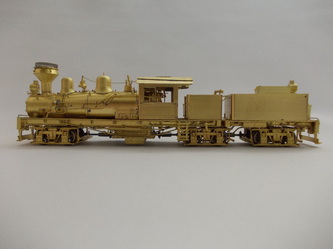 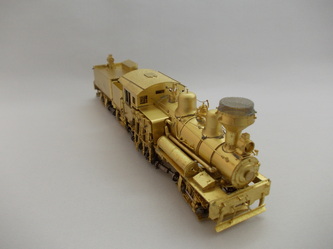 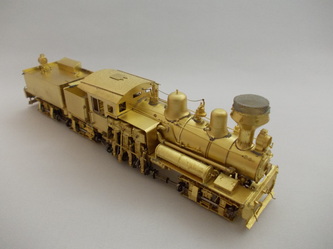 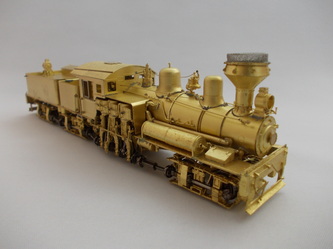 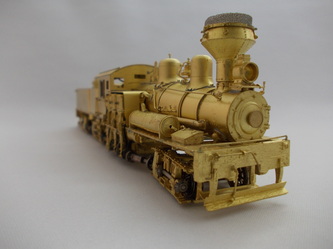 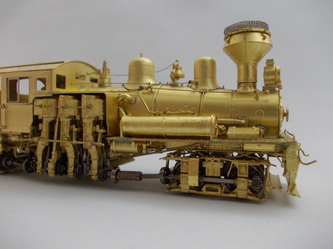 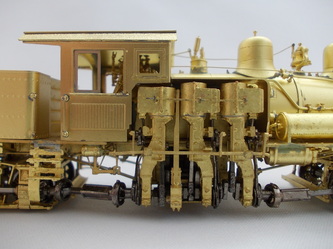 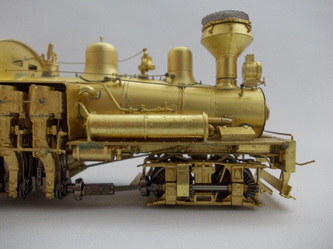 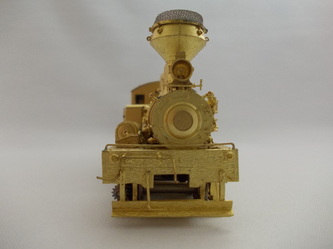 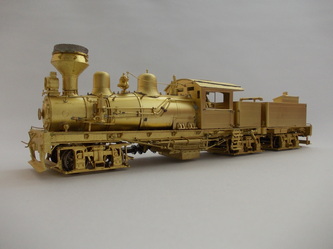 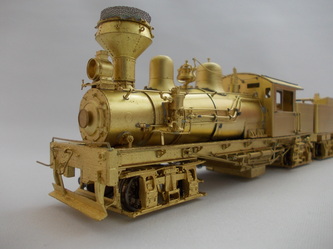 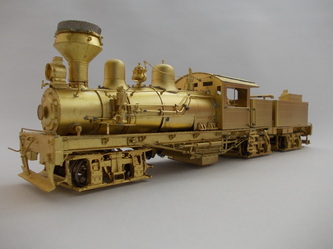 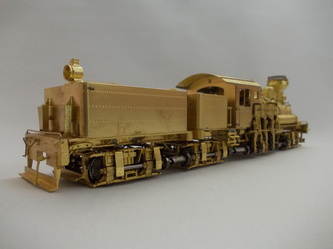 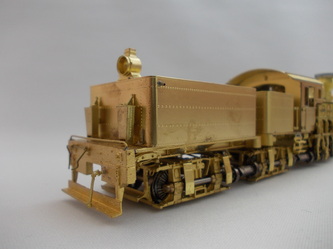 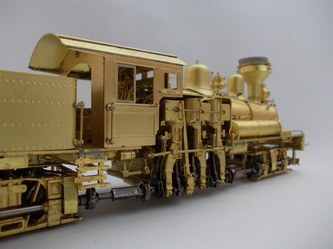 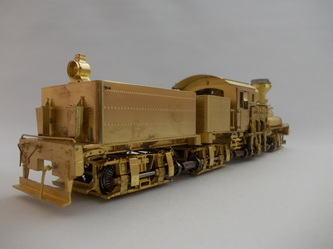 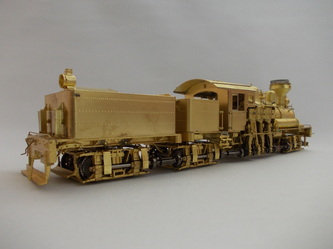 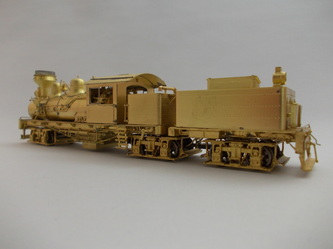 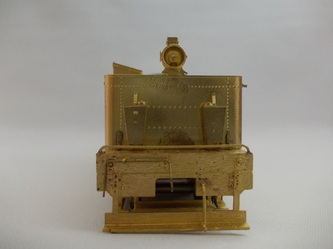 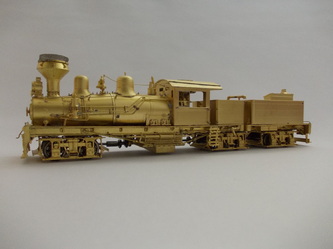 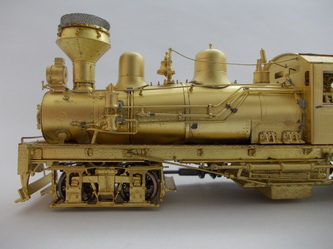 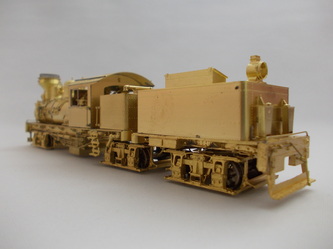 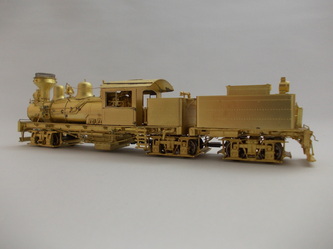 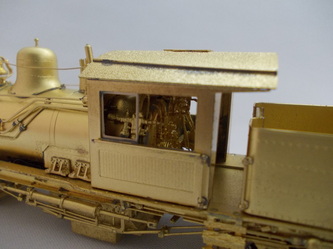 Shay No. 5 -- (Mower No. 5) – C/N 1503, 1905; Class 80-3. Built for the original Cass-based railroad, West Virginia Spruce Lumber Co.’s Greenbrier & Elk River R.R. Shay 5 is the oldest and longest-operating Shay at Cass. Originally assigned to the Cass Hill as road engine; various assignments while based at Spruce and on Elk River – until about 1939 the locomotive came to Cass only for heavy repairs. Became Mower (MLbr Co.) No. 5 in 6-42; equipped with power reverse in ICC compliance (applicable to locomotives 100 tons or over) for operation on the Western Maryland, 6-42. Involved in a head-on collision with a WMRy H-8 2-8-0 at Spruce, 10-2-42; due to her weight and the deteriorating railroad, saw little work after 1953; used at the Cass Mill as a steam source during the "Big Freeze," 3-58 – and as needed for other periods when deep snow prevented logs from being shipped. This service ended in [2]-59 – when all cylinders were cracked by freezing out of negligence. Set aside in the upper end of the shop; sold for scrap to Midwest Raleigh, Inc., 9-60; conveyed by Midwest Steel Corp. to the State, 8-62. What was envisioned as a $20,000 repair – "every part except trucks, cab and boiler replaced" – didn’t turn out as such; CSRR service debut was 5-5-66; shopped during [at least part of 1968 and throughout 1969]; became the regular Bald Knob helper and retained that status until No. 7’s demise, then served as regular Bald Knob road engine until No. 2 took those duties. When shopped for firebox flue sheet replacement ([10]-95), a cracked boiler throat sheet was eventually discovered; repairs included all new stay bolts, a replacement cylinder, smokebox, smokebox ring, smokebox door, exhaust gooseneck; several setbacks occurred in out-shopping (outside-contracted parts not correctly machined, the boiler welder’s retirement) occurred; a newly created water tank was borrowed from Shay No. 11 in 9-99; out-shopped and tested on 9-31-00, then placed into service the next day as Bald Knob pusher engine – an assignment held (as needed) throughout the operating season’s remaining weeks (sans tender letter lettering); served as the Bald Knob pusher engine during the first part of the 2001 season then, with No. 2’s post-shopping reactivation, went to standby status.

2. No. 5 held down Cass Hill duties until Class 100-3 Shay No. 8’s arrival in 1912, then mostly worked out of Spruce transferring log cars from pick-up spots along Shaver’s Fork until that venue was logged-out, then went over to Bergoo and worked Leatherwood Creek’s two forks. Later served regularly out of Slaty Fork (she enjoyed an occasional odd call, but typically relegated to woods spurs – and Baldwin Mine runs in the 1930s). The end of the Class 150-4 Shays (Nos. 12-13), returned her to the status of largest operational Shay on the railroad.

3. The steel cab that replaced the original wood one was off a scrapped C&O Shay, part of two carloads of parts included when Cass purchased two retired Class 150-4 Shays (which became GC&E 13 and 14); the date of installation would be after 2-23. George Kadelak helped confirm this theory that existed for many years by arranging for Allen County Historical Society to send Lima 150-3 cab drawings to Artie Barkley, who took measurements in 4-01.

4. Oral history citing Mower somehow misinterpreting the ICC edict and thus installing the power reverse is considered inaccurate at this time. All steam power 100-tons or larger operating over a common-carrier fell under ICC compliance. 5. Documented service in 4-56 and [?]-[58]. The miles of almost-ridgetop track between Big Run and Cabin Fork offered added challenges to operating this large Shay because of the soggy surface conditions in tandem with 65 lb. rail spiked directly to ties without plates and untreated ties on unballasted surface.

6. No. 5’s use at the Cass Mill came as the result of heavy snow blocking movement of logs from the woods. As built, the boilerhouse was equipped to optionally burn coal, but Mower did away with this capability. The 5’s mission was to feed the boilerhouse enough steam to keep pipes from bursting (previous damage under similar conditions was considerable). Thanks to Ivan Clarkson’s slides, she is documented behind the mill (black smoke rolling in one view) during the "Big Freeze" on 3-23-58. No. 5 was operating on the mountain at least a few times during 1958, so reports of the cylinder cracking incident occurring during the Big Freeze are erroneous – the incapacitation occurred during the winter of 1958-59. Stored in the upper right corner of the shop, No. 5 sat in one spot so long that the rail sagged under her weight.

7. Appearance has changed considerably since early CSRR years, including loss of riveted tender and bunker and removal of the power reverse (with air tank moved back and addition of a tool box) [between 1977 and ‘79]). A one-piece bottom bracket was installed prior to 1987 service. Her original CSRR look (1966) included decorative coal bunker fairings, unusual cab backhead/bunker skirt and high-mounted tender headlight.

8. Builder’s plates were not affixed to the smokebox replacement made during the logging era (c. 1925?).

9. No. 5’s front plate was removed, likely by a visitor, prior to 1958;
she was in service on the CSRR for several years before an authentic Lima front number plate was acquired – first outfitted with a very unauthentic front plate (5 inside a single, raised plain circle different from the type worn by Shays Nos. 1 and No. 4). The current front plate, an accurate reproduction, was installed prior to the 1971 season.

10. The bell was removed and mounted on No. 4 (for the bigger sound and ornate raised stripes) prior to the Governor’s inspection tour in 4-61. It remained on No. 4 until after the C.P. Huntington NRHS charter of 5-61, then removed and placed on the shop floor. Sometime soon afterwards, before the State acquired the railroad equipment (despite the bell belonging to No. 5, which was owned by either Midwest Raleigh or Midwest Steel – depending on the date), Don Mower dispatched a log truck to the shop and loaded numerous items (a pre-existing arrangement may have been in place). Don Mower had the bell placed in a back office of the company store. In 1966, he sold Don Mower Lumber Co. to J.W. Harrel. This new Don Mower Lumber organization sold the company store’s interior (fixtures, furniture and bell) to Cass Country Store, Inc. – Warren "Tweird" Blackhurst, Stella Blackhurst and Jessie Brown Beard Powell, principals. Powell happened to outlive the others. The bell was moved under Powell’s direction to a storefront window for display in 5-9]?]. When she sold the store to the State (hence the State Park-operated gift shop), the bell remained on display. There is optimism that a purchase arrangement for No. 5’s bell can be negotiated by the state so it can be returned to the engine.

13. During the period Richard Carter regularly ran No. 5, decorations included a brass "Safety First" disk from a Cherry River Boom & Lumber locomotive mounted from the front headlight bracket and Southern Ry. eagle. (For a period, the Safety First disk was also worn by Shay No. 4.)

14. New running gears, line shafts and tires were installed prior to the 1991 season.

15. Numerous special tributes were organized for the locomotive’s 100th birthday – the second oldest Shay in operation.

Source:
The majority of these data were compiled as of June, 2002. Phil Bagdon prepared and maintained this list until his untimely death in 2003. Jonathan Bailess, of Glenville, W. Va., started compiling updates to the Roster in January, 2012. The updates will be posted as Jonathan can get them ready and his updates are marked with "[JB date]".